Acela! It is America’s fastest train, and one of its most successful. Operating over Amtrak’s electrified Northeast Corridor between Boston, New York City, Philadelphia, and Washington, D. C., at speeds up to 150 mph, the Acela carries more than 3 million passengers a year.

Amtrak’s Acela high-speed trains, built by Bombardier and introduced to service in 2000, are powered by two stylish but burly (to meet U. S. crash standards) electric power cars, each weighing 200,000 pounds, delivering 6,169 horsepower, and equipped with advanced A. C. traction. Between the two power cars, the standard Acela consist is six cars, five coaches (one configured for first class and four as business class) and a mid-train café car. The coaches of the Acela, but not its power cars, are equipped for tilt operations.

Now a decade-and-a-half into their service careers, Amtrak’s 20 stylish Acela train sets continue to set the standard for both speed and comfort on the busy Northeast Corridor and typically carry upwards of 15,000 travelers each weekday.

Equipped with authentic cab signaling capabilities and the passenger-car tilt-feature which allows the train to smoothly navigate curves along its route, the Acela brings the best of American high-speed railroading to Train Simulator! 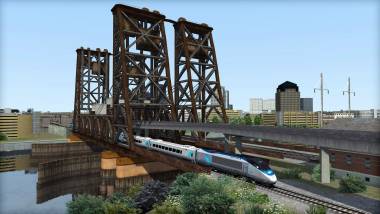 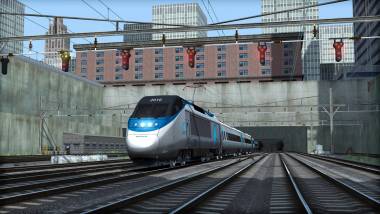